Unstoppable technological advancements are now almost uniformly distributed to in various aspects of our daily lives. It also triggers a shift culture, customs, and behavior. But not all cultures are shifted culture which is worse than the modern culture that replaced it. There are times where we rethink, the simple thing our ancestors left behind. Things that fun, without putting aside the values ​​of humanity. Culture is a way of life that developed and owned by a group of people and passed down from generation to generation. Indonesia is a country made up of many provinces, each province has a culture, one of which is the Karo Regency However, along with the development of culture time in the Karo Regency of the less known by the public, especially by the people of the Karo Regency it self is due to the influx of foreign culture in Indonesia and in the Karo Regency in particular. Therefore, they developed a aplication introduction to Culture BatakKaroof responsive multimedia based community that aims to ease the Karo Regency it self, Indonesian people, even outside the community to learn about the culture in Karo Regency, North Sumatera province. The method used in this research are Linear Sequential Model. This research is expected to help people to find information on a wide variety of cultures that exist in the Karo Regency.

Most read articles by the same author(s) 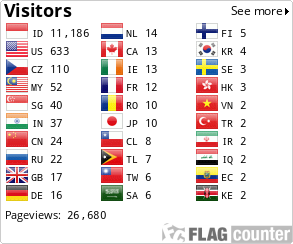